Conspiracy theories are not what they used to be

My daughter told me she had an assignment about conspiracy theories for school. She thought that the very name seem to remove any credibility to it. By labeling something a conspiracy theory, you immediately treat it as unfounded.

It didn’t use to be that way. When I was younger, conspiracy theories were a fundamental part of our democratic life. In Italy, government behaviour has been murky at best especially during the 70s, the so called “years of lead”. That was the time of “state terrorism”, and when Pier Paolo Pasolini (pictured above) wrote his landmark “I know” article on Italy’s number one newspaper Corriere della Sera. And the term “conspiracy theory” was used by right wing reactionaries to quit credibility.

In other words, the low quality of conspiracy theories is achieving a polarisation of the discussion, much in the same way that terrorism polarises the policy debate. The world becomes divided between conspiracy theorists and mainstream, just as between ISIS and Bush/Trump/LePen.

The problem is not the influence of conspiracy theories – it’s their low quality. It is a pity because there is lots of space for good and useful conspiracy theories, with the deep linkages between mass media, politicians and multinationals. Just to mention one I come across every day, the Spanish newspaper El Pais is constantly spinning facts, becoming a sort of renewed Pravda of the declining Socialist Party.

But not everything is bleak. I think we are witnessing a democratisation of conspiracy theories. They used to be reserved to the cultivated elite, but now they have been taken up by a wider audience. The decline in quality is an inevitable consequence of this democratisation. And this is not necessarily bad. Conspiracy theories could be seen as a first step towards political conscience. We should build on them as a sign of critical thinking. They will get better over time.

Certainly the decline of newspaper and loss of trust in mass media has played a role in this. But this is not to say that we need the old newspaper back. Mass media have failed their promises and they only deserve not to be trusted. And we most certainly not need Facebook to protect us from fake news.

In the medium term, conspiracy theories and fake news will be defeated by intelligence and criticisms, as they have always been. People will grow out of it. While there is damage being done in the short term, I just do not believe that we can attibute Trump and Brexit to the people being fooled by fake news.

And most certainly the solution is not to bring back the old media or to be protected by new media.

One can’t spend a day without discovering a new app or online service that delivers something at home. It’s not just the explosion of food delivery, which is today one of the most crowded startup markets. You can now shop groceries using Deliberry, or Amazon prime. Uber is moving into the home delivery market. Glovo brings everything home for you. MrJeff collects your clothes and gives them back clean and ironed. Wallapop lets you buy and sell second hand stuff from your neighbours, based on your location.

We are starting to outsource cleaning, ironing and cooking: we used to do it ourselves, or have a maid to do it, but now there are specialised services. This is also related to the servitisation trend, where instead of owning a car or a bike, we rent it by the hour. This specialisation / servitisation evolves in a new spatial distribution of activities. By the way, it could actually be a good thing for the environment.

I was recently invited to teach at the University of Sassari, in Alghero, Sardinia, by professor Plaisant. Amazing place, and really interesting discussions. I there realised how much these trends are mainly urban. This spatial redistribution happens within the city. The rural areas are almost totally excluded. They don’t receive Amazon Prime or Glovo, they can’t buy food to be delivered at home. This explosive trends towards home delivery is excluding those areas which could actually most benefit from it. This could be one important component of this deep cultural divide that became apparent in the US elections.

This is nothing new, but prompts two questions:

And let’s not forget that overlooking the needs of those in rural areas can be very, very dangerous.

Beyond startup-corporate collaboration: midcaps as the missing link

As I pointed out in a previous post, the startup culture is now percolating into large corporations. Virtually all large companies have collaboration programs, from formal collaboration to co-working to competitions.
Nesta has published two interesting reports addressing the main types of collaboration and the related bottlenecks (see image below). 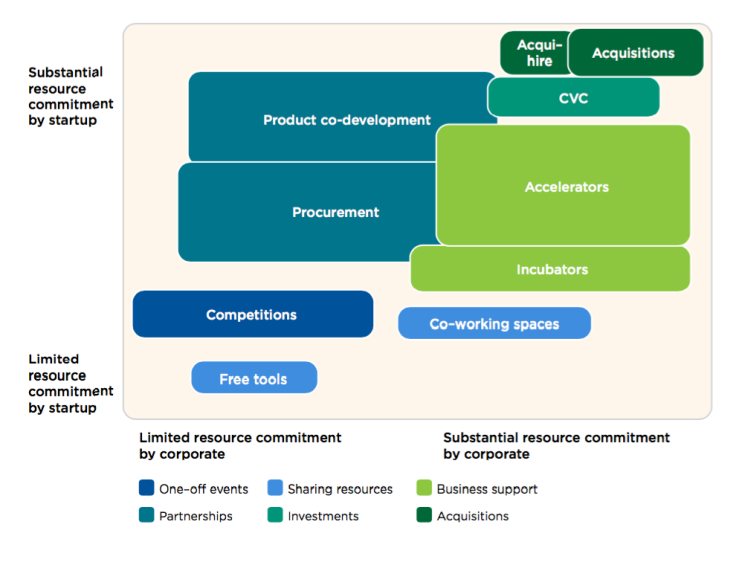 Governments have also promoted this kind of partnership as a way to for startups to grow. Rather than focussing on creating new large companies from scratch, recent efforts in Europe have focussed on matchmaking between large corporates and startups, for instance in the context of the Startup Europe Partnership. Collaboration is important for startups in order to scale, and for large corporates in order to innovate in traditional sectors and avoid being out-competed by new players.
This is certainly commendable, but is it enough? Large corporates are important, but they represent only a fraction of the economy. We can’t overlook the fact that a key role in Europe is played by smaller, more traditional midcaps companies, especially in traditional sectors such as manufacturing. Imagine for instance how big data startups could leverage the huge amount of data gathered by sensors present in most industrial machinery to develop predictive maintenance models.
This is even more worrying since, contrarily to large corporations, most midcaps lack the awareness and skills to establish and manage collaboration with startups.
How can we help startups to partner with the core traditional players of the economy? Is there any experience and lessons learnt worth sharing?
November 16, 2016 0

How can we make #scaleup support services in EU work better together?

Yet when it comes to output, the EU performance is not  satisfactory. In 2015 there have been 33 exits from European accelerators, against 193 in US.

Accelerators are just an example. There is no doubt that European support services to startups remain too fragmented and in some cases even redundant. Should every city have independent incubators? Has Europe gone crazy for accelerators? There could be both efficiency and effectiveness gains from greater synergy.

Regarding the first point, what are good examples of “mapping” exercises, such as the mentioned Global Accelerator report? What other support services are there that must be considered?

Regarding the second point, are there inspiring examples of federation of services? I personally know for instance the Climate Information Brokers initiative, which brings together 150 key players in the field of Climate Change in order to reduce redundancy and improve the effectiveness of their services. Could this provide a blueprint for startup support?

And when it comes to collaboration, how do we deal with “Not Invented Here” syndrome and turf wars? How do we ensure that public and private investment in support services is not creating a bubble?

The future of startups is no startups

Where will we be in 10 years when it comes to startups and scaleups in Europe?

Well, let’s start by looking backwards. Where were we in 2006?

In 2006 web 2.0 was just starting. I can still remember my then boss circulating an email in late 2005 about the importance of the yet unknown site called Youtube. Startups were certainly NOT on the agenda of policy-makers. Still under the effect of the dotcom bust, I remember some senior civil servants referring to web companies as “parasites” of the telcos and the content companies, which were considered the “real companies”.

How things have changed. Today every country has a startup strategy. Politicians love to be in the middle of startuppers. So by 2026, we should expect startup issue to become dominating throughout all government policies, right?

No, I think ten years from now startups will disappear from the policy agenda. But not because of another forthcoming dotcom bust, or another disappointment with the economic impact of these companies.

Precisely for the opposite reason. Startup will not be important because the startup culture will have become pervasive. There will no longer be a distinction between incumbents and startuppers, because incumbents will incorporate the values of startups: business model experimentation, failing forward, disruption.

This is a bold statement, designed at stirring discussion. But it is also based on today’s weak signals.

At the macro level, large companies are trying to integrate the startup culture: by launching incubators, corporate venture capital, acquisitions, hackathons, self-disruption initiatives, and hosting co-working spaces. The example of how the sharing economy has disrupted strong established business model is too prominent to ignore.

At the individual level, there is no longer such thing as an “employee culture”. Firing is cheaper and easier than ever, and has happened even in the public sector during the austerity measures. Salaries are increasingly performance-related. There is widespread recognition that no job is safe. There is a fine line between a fixed post, a temporary post, a self-employed post and creating a company. It’s a continuum rather than an opposition between safety and risk.

In short, every company is changing into a startup, and every worker into an entrepreneurs.

These are just some of the ideas to be discussed at the forthcoming SME Assembly, to be held in Bratislava next November 23rd-25th . But the discussion has already started in the Linkedin group. Look forward to hearing your ideas.