Is freer circulation of #data likely to lead to winner-takes-all markets?

The analogy comes from a 2003 Clay Shirky comment on blogging, where he suggests that greater freedom leads to power law distributions:

In systems where many people are free to choose between many options, a small subset of the whole will get a disproportionate amount of traffic (or attention, or income), even if no members of the system actively work towards such an outcome.

There’s a thin line between groupthinking and scientific consensus

So, the evaluation report of IMF is out, and says all sorts of negative things about how the financial crisis in the Euro area was handled; basically that the stability of the Euro area was more justified by group thinking than by economic evidence.

This is a nice complement to the Chilcot report on the Iraqi war, recently published in the UK. They certainly shows the importance of policy evaluation. Taken together, both reports appear as a serious hit at “Blair-style” left wing parties, which are both pro-austerity and pro-american.

I haven’t read the report yet but I am fascinated by this accusation of group thinking as opposed to evidence. In fact, Kuhn shows well how, even in hard sciences, group thinking is an integral part of the scientific process. The evidence about the centrality of the sun was available long before Copernicus. The “paradigm shifts” are not simply caused by the evidence accumulated, but by a cultural shift of the scientific community.

So is the accusation legitimate? What is the line between group thinking and scientific consensus, especially in soft sciences? And where does the Washington consensus stand in this continuum?

Do we need better property rights on #data to enable greater sharing and reuse?

Raw data are not covered by IPR, while curated database are.

But property rights are the basis of capitalism. If you don’t establish ownership, you can’t buy and sell stuff.

So if it’s not clear who owns the data, then they will be not shared or sold or reused. Unless of course they are totally open data.

Interestingly, a similar problem is happening in science. One of the main barrier for scientists to share data is that there is no established format for data citation (as opposite to publication citation) and no practical application of it, so they will not gain but only loose by sharing data.

Big data is changing agriculture, moving towards the so-called “precision agriculture”.
Almost all new agricultural machinery is equipped with sensors that monitor the field. Drones are taking photos of the field to map their growth.
Traditional technology producers, such as John Deere, are equipping tractors with sensors and offering cloud based analytics to farmers based on these data.
New agri-tech startups are gathering data and providing data services for precision agriculture.

Moreover, as we wrote before, Business Insider reiterates that in agriculture.

the real potential is what happens when the data from thousands of tractors on thousands of farms is collected, aggregated, and analysed in real time.

But who owns these data? Who can share them and analyse them?  Typically these data are gathered by sensors in the equipment and managed directly by the ATPs. Monsanto’s equipment generates about seven gigabytes of data per acre.

It is not clear to what extent farms own these data, and to what extent ATPs and other third parties can access and reuse the data. Contracts are difficult to interpret and understand by the farmers.

My impression is that there are players with competing interests: farms who want to use these data to increase productivity; ATPs who can manage and merge datasets from many farmers to improve their services and expand their business; and third parties such as startups which could use data held by ATPs to develop new services.

In other words, is the market efficient? 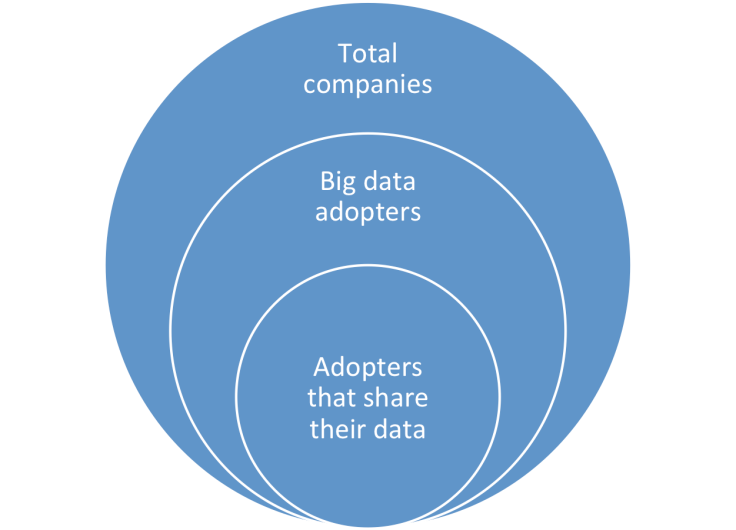 A minority of EU companies use big data: only 6,3% according to our IDC/Open Evidence report on the data market.

According to BCG, companies tend to use their data internally, without sharing them with third parties:

The majority of organizations we surveyed prefer to have control over the development of new products and services. They frequently contract with third parties to help speed development, but full-fledged partnerships or alliances are still a relatively uncommon arrangement.

But according to experts, companies should learn to share their data.

the Data Economy refers to much more than any one enterprise or organization making better use of data. Discreet use cases and applications of Big Data must be part of a larger whole. In the Data Economy, entire industries will operate and markets function all through the intelligent use and sharing of data.

This does not mean necessarily sharing data openly, but normally through APIs. However, the OECD goes further into this, and suggest exploring a “data commons”.

Non-discriminatory access regimes, including data commons or open access regimes, should be explored, as a means to support the production of public and social goods without requiring governments or businesses to pick winners (either users or applications).

So my question is: do we have evidence that companies should learn to share more their data? What are we missing out because of this lack of sharing?