How useful is the wisdom of the crowd in #opengov? 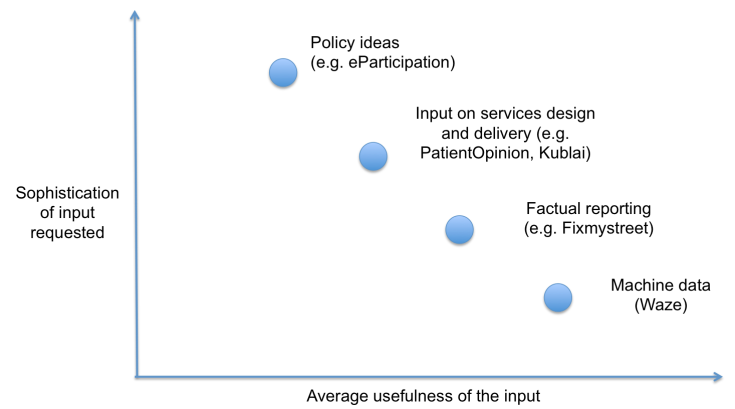 One of the questions that I often ask myself is to what extent Open Government is a goal in itself, or a mean to actually improve the quality of government.

In our study on Open Government Services, we are starting to see pattern emerge from the case studies. One of the ideas that sprang to mind is represented in this sketch, that we will further discuss at our forthcoming workshop.

Basically, when it comes to Open Government, the more sophisticated the input expected from citizens, the more rare it is to receive useful contributions.

Citizens input is useful when it comes to reporting factual issues such as holes in their street; it’s useful (maybe a bit less) also for qualitative input on service co-design, such as how to improve hospitals. But when it comes to abstract policy issues, the majority of contributions are not really useful.

This is also why local eParticipation is more effective: because local politics is mostly about delivering services to citizens, while national politics is about more abstract issues such as regulation. Of course, this overlooks the intangible and long term benefits of open policy making, for instance in terms of increasing citizens’ trust in government. Moreover, we should note that even if the average is not very useful, there can still be some very useful contribution that make the open policy initiative worthy.

Another observation is that the more sophisticated the expected input, the less effective are online methods. Complex issues need face to face discussions, with iterative dialogue that helps mutual understanding between government and citizens. For reporting holes, online methods work well enough.

What do you think?

Four scenarios for the future of #opengov 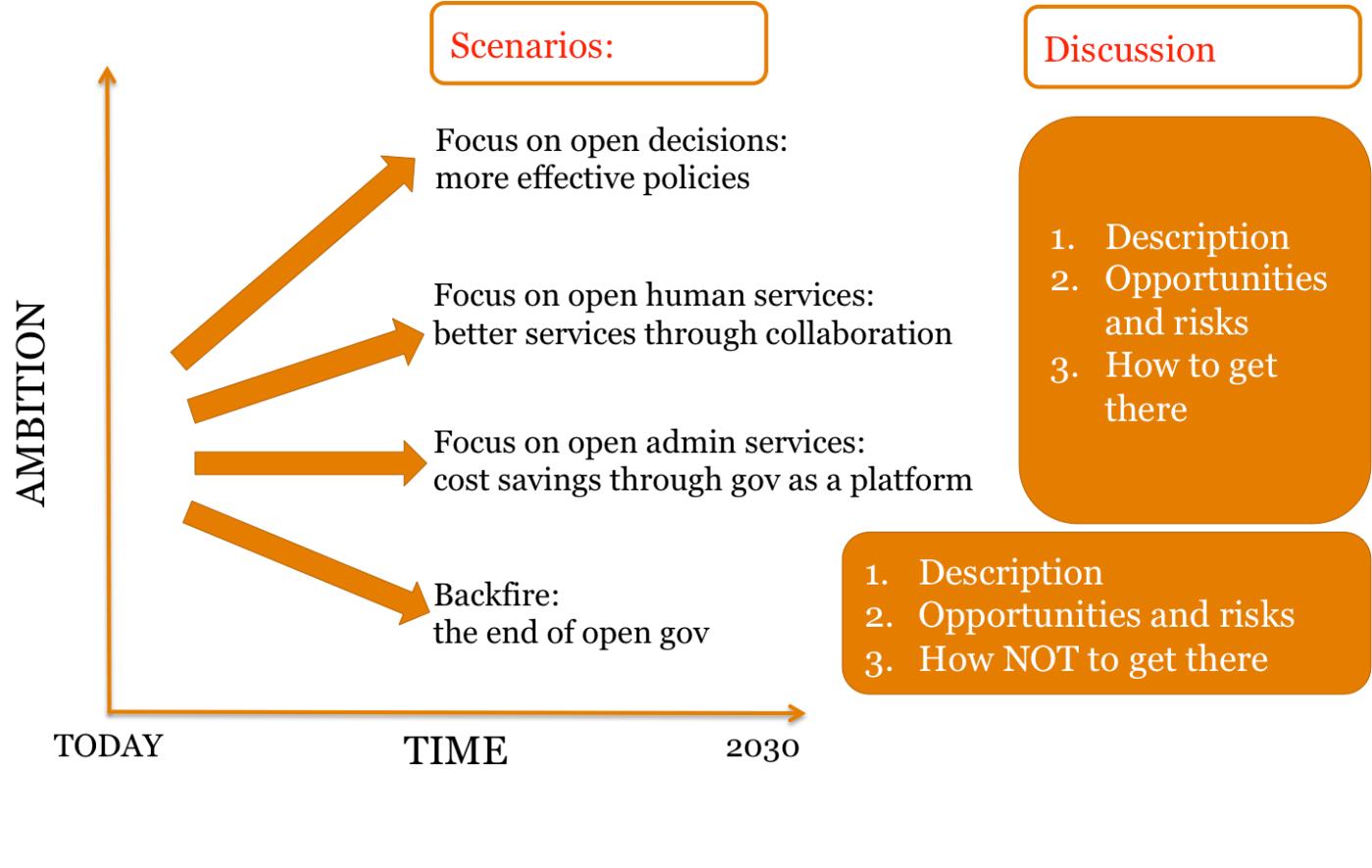 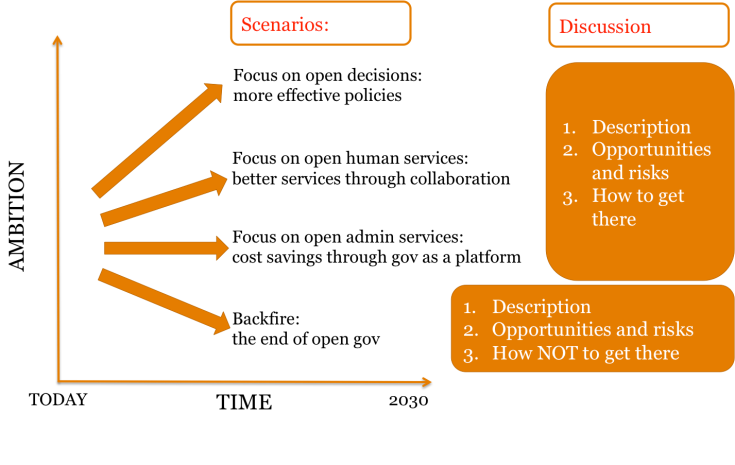 In the context of the study on the new generation of eGovernment services , we have produced a definition and taxonomy of “Open Government Services”, gathered 180 initiatives and carried out a cost-benefit analysis of 10 cases (not yet public). We have also carried out a survey of stakeholders (ongoing) and will host a workshop on May 31st.

This post spells out 4 initial scenarios to be discussed at the workshop, based on 4 levels of ambition, from the most to the least ambitious:

In each scenario, participants will be asked to enrich it with more details; identify its drivers and bottlenecks; suggest action to make it happen (or avoid it to happen).

The main policy decisions are taken with the fundamental input of citizens. Online discussions become the norm, and part of the policy cycle.

Any decision which is deemed “of public interest” is published for open consultation of at least one month, both in the executive and legislative branch. These open consultations allow anyone to present comments and comment and vote on the proposals of others.

On average, each consultation involves 1000 participants, but some of them reach 100.000 and the majority of them has less than 500 people. Many citizens who were never involved in politics take part in these decision, bringing their specific knowledge. Additional live and email contact are carried out for specific segments of the population under-represented in the consultation.

The quality of the input is high, and many proposals by citizens are directly included in the final decisions, and citizens also help identifying the top quality proposals.

The government reports back to citizens about what has been done and how their comments have been used, leading to a virtuous learning cycle.

Citizens also provide open input in the final evaluation of the implemented policy, which is published online for public commenting.

Government partially reduce their spending in scientific support to policy, thanks to the open intelligence brought by citizens, and in receiving lobbyists. Lobbying mostly happen through the platform rather than in dedicated meetings.

As a result, citizens trust government more, are more willing to pay taxes and less likely to vote for populist parties. Public policies are more effective as all stakeholders feel ownership and collaborate to its success.

Public services of genuine added value (human services) are systematically designed and implemented with the involvement of citizens and business.

Any function of government providing services to users has to run a systematic “crowdsourcing test” to assess how citizens can contribute by brining specific knowledge and their experience as users, at least for some services considered as “core service”. Any service not being co-produced should duly justify the reasons.

By default, these “core services”:

Citizens are used to provide specific input and feedback in the delivery of these services. The majority of citizens provides feedback on the status and quality of the services, report problems and provide input for improvement. The feedback is constructive, even when critical. They also perceive are their public duty to regularly support other fellow citizens and business using the same service.

Civil servant continue their work by monitoring citizens input and ensuring that it is well balanced, and acting in issues not covered enough (such as specific services or some specific areas of the city). Rather than controlling the status of the street, they monitor citizens input on it and ensure that all streets are adequately monitored.

Public spending remains on similar level, but the quality of services is much higher and citizens satisfaction is high. There are less mistakes being done and money wasted in delivering services, and trust in public  service delivery increases.

All the core administrative services are tightly integrated across government, and provided through composable modules that are re-used and integrated automatically. Any such service provide API access for additional integration without any additional software development.

Services are provided automatically and proactively to citizens, and the once only data provision principle is enforced throughout all levels of government and also on cross-border services.

Citizens and business have predictable times for the delivery of their administrative documents, and can monitor their progress online.

Clear rules about access to data are provided, and users can see which data are owned by which agencies, and grant permission for access.

Administrative services are open for integration with services provided by business. For instance, government electronic ID is used by banks, and social media authentication is used by government for some of their activities (e.g. online discussions). Government provide open data and open API systematically for third parties.

Citizens carry out their transaction largely online, in an automated way directly or through dedicated commercial services. Online is the default way to interact with government, but

They are not particularly engaged in public issues, but they can monitor any decision taken by government through specific dashboards produced by newspapers and NGOs.

Government spending is significantly reduced because of savings in service delivery and greatly reduced rate of mistakes. Moreover, government spend less in developing customised software, but reuse software built by other government agencies and “off-the-shelf” apps by commercial players.

Companies and business save time and money thanks to automated, proactive services.

There is a thriving market of business built online services based on and integrated with government-built software components.

Scenario 4: the end of open government

20 years after the Obama memo on open government, it becomes clear that transparency, collaboration and participation are not delivering on their promises.

The open data portals have been closed because of lack of usage. The promised large scale economic gains from reusing open data never materialized.

Citizens are not interested in monitoring themselves how government works, and much less in taking part in service delivery and public policy.

Building composable services turned out to be immensely time-consuming and difficult to orchestrate across governments. Many service failures took place and it proved impossible to understand ownership and ultimate responsibility for the quality of service.

Citizens and business simply want government to do the basic service delivery, limiting the costs to the minimum.

Government costs and benefits remain stable, but at least there are no major disasters happening. Public Sector Innovation disappears from the policy agenda.

These scenarios will be discussed online and at the workshop. Based on the stakeholders input, initial policy recommendations will be developed.

They will be published online for public commenting.

Based on the feedback received, a final version will then be developed.

Who hijacked my liberal agenda?

I am, in many ways, a liberal.

In particular, I favour free trade. I think that, by default, free trade agreement are good. And my argument falls flatly with neo Ricardian approaches, such as the classical Krugman. Free trade has, historically, always be supported by multinationals, but this is not enough to make it wrong. We know that for all the past free trade agreements.

But I have a problem:

My plea is this. There are genuine liberals who believe in free trade: not because they are spokespeople of multinationals; not out of cynical realism about “that’s the way the world goes”; but because free trade is the best antidote against war, and because protectionism is worse.

We desperately need credible, charismatic, authoritative left wing free trade advocates, that do not eat into the hands of multinationals, that don’t use the revolving door, that don’t have questionable moral habits.